Posted on February 28, 2014 by animalsandmagic

Many people give dogs hard treats to help their teeth. Once I did this with Taco until I discovered that my dog just isn’t like other dogs. This is the picture story of the day I finally gave up giving him hard treats. He does have and eats semi-hard treats, treats that are hard enough to minimally help his teeth but can be broken and chewed easily.

While that is a good thing, it is not the story. So, without further delay, here is our story. 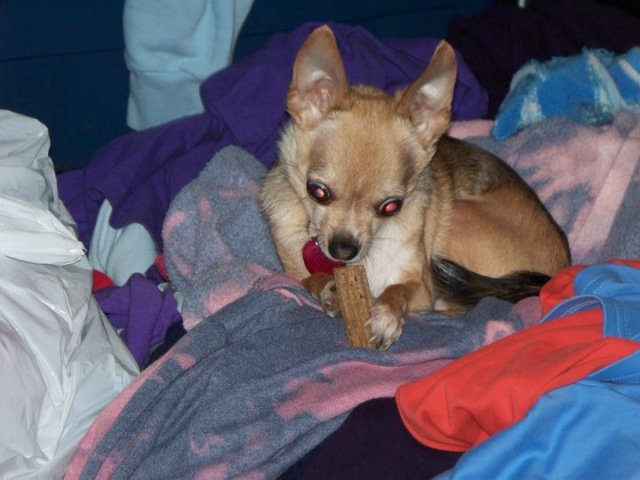 First I gave Taco the treat and he spent a few moments observing it. 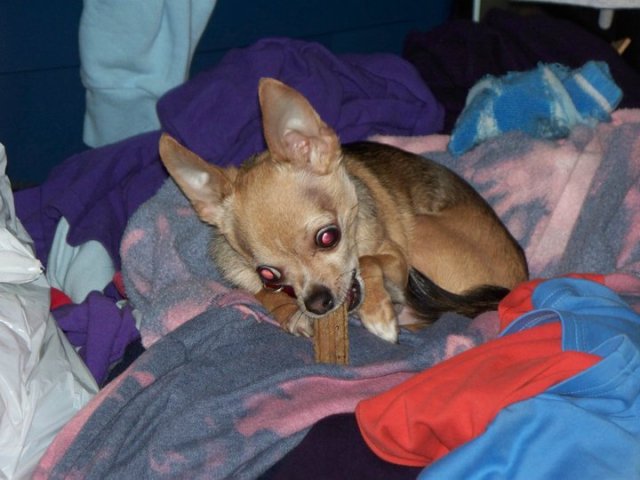 Next he began chewing on it a little. 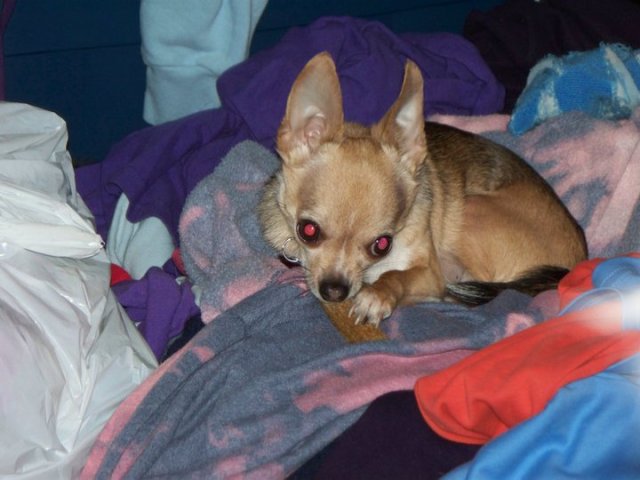 A few seconds later he switches to chewing it on the other side of his mouth. 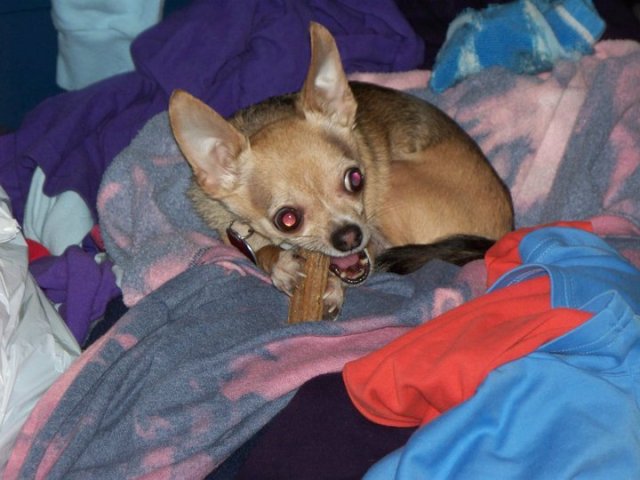 Then he quickly decides to return to chewing on the other side of his mouth again. He appeared to be enjoying the treat. 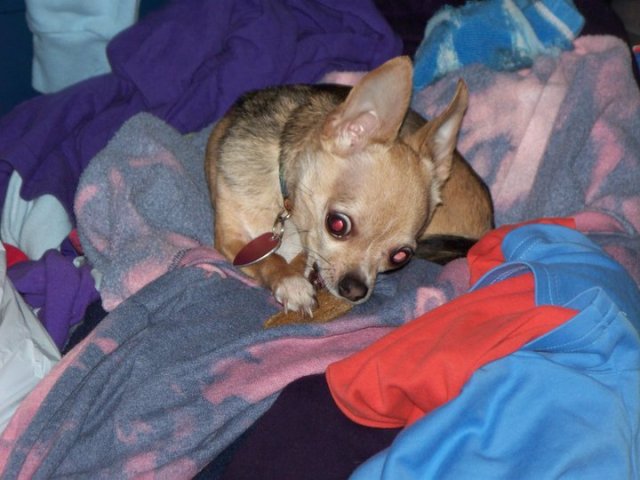 A little while later he switches sides again. This is the side he normally chews food and treats on though he is now missing one of his back teeth so it’s become a bit hard for him to do. 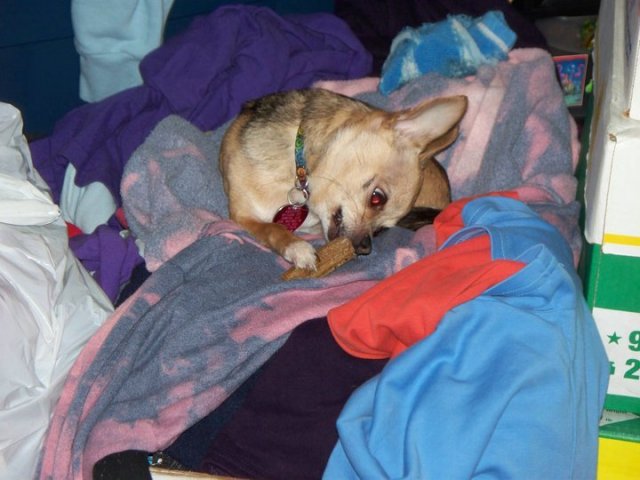 Taco now switches to using his front teeth and tongue in an attempt to get the treat softer. The mark by his eye is toothpaste that he hadn’t yet let me clean off. We often had toothpaste problems before I discovered the tiny toothbrush that I got from the vet, and can only find there, works best. Though I only learned this after buying and trying every small dog brush at the nearby petstores. We still make a mess with toothpaste sometimes but not nearly as much. 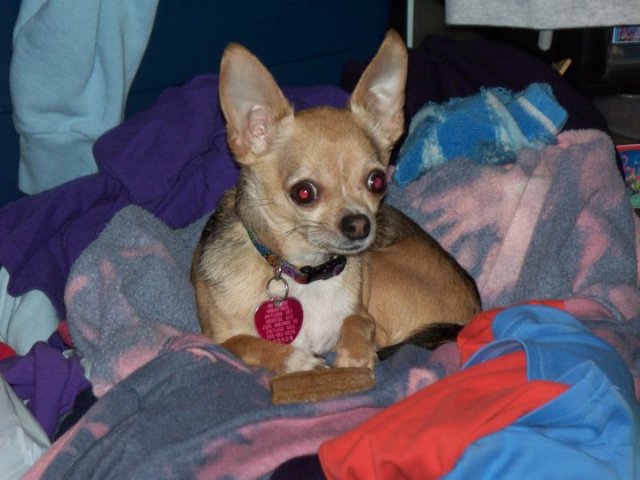 Having failed to soften the treat in a short period of time, the no longer than five minutes in which this photo session took place, Taco puts down the treat. He then looks at me with the camera and wonders why I am taking pictures of him. 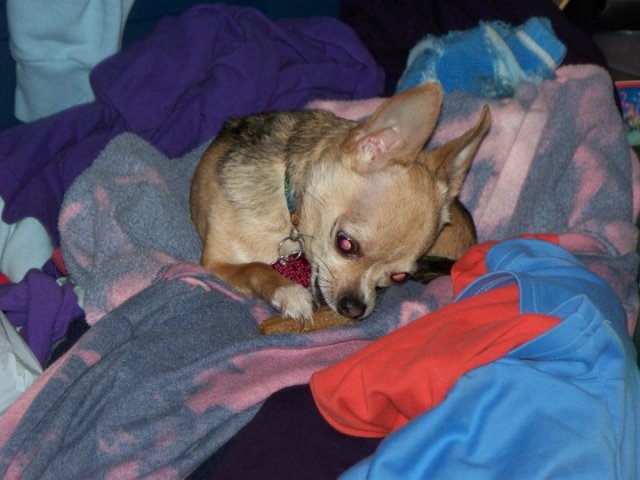 Normally this next photo wouldn’t happen, but this time he decided to give the treat one more try. 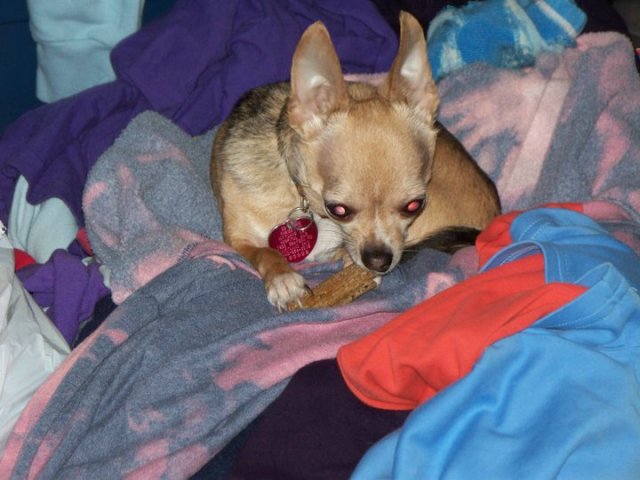 He had to try it on both sides again and once again he attempted to soften it for a few seconds. 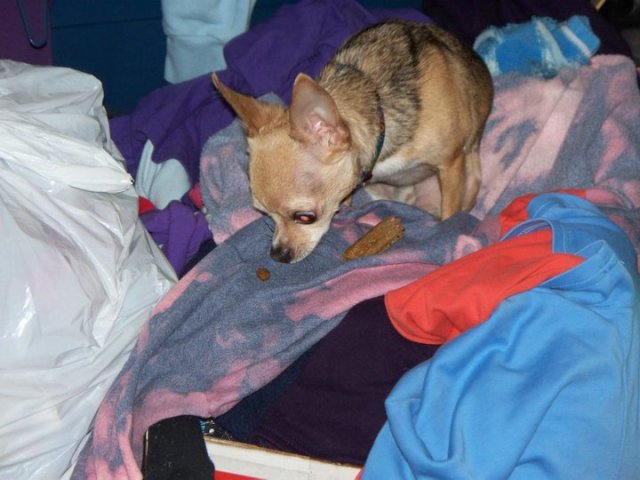 While he was softening the treat I grabbed a piece of dog food out of his bowl and placed it next to him to see what he would do. Curious of what I put there Taco almost immediately drops the treat to check it out. 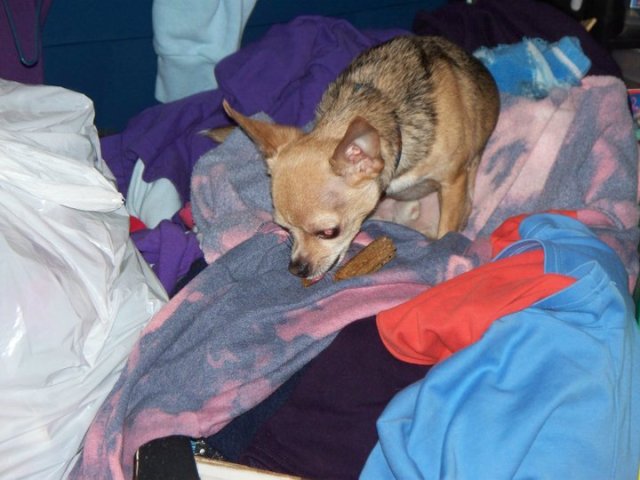 I thought he would go back to eating the treat but he didn’t. Instead Taco ate the regular dog food. This is the same dog who buries treats in his bed and other various locations to dig up and eat when he is hungry instead of eating his dog food, so for him to do this his regular food had to interest him more.

The pictures end with the above image but what happened next is that Taco went over to his dog bowl to eat his food instead of the treat. Neither that day or the rest of the week, in which I allowed the treat to remain where it was, did Taco ever return to it. I eventually got rid of the old treat and gave him a fresh which he simply ignored and eventually I had to get rid of that one as well. Having a whole bag of those treats I later found a friend with a dog who would actually eat the treats and gave them away.

And that is when and why I eventually gave up giving my dog hard treats and just started brushing them more instead. I would eventually attempt to try dental spray with him, and still use it occasionally, where I would learn it’s easier to brush my dogs teeth than get him to open his mouth for the spray which he fights more than a bath.

Taco is definitely not the average dog.

If ever you want to know more about him you can see him in the Meet the Anipals section on http://www.jenniferpriester.com and/or for a photo gallery and videos, along with occasional updates from the life of Taco, you can visit his cuteness.com profile. The link to this can be found at the end
of his section on the above mentioned website.

I am an author, artist, photographer, and the owner of A&M Moonlight Creations, an independent publishing company. I write children’s-tween fiction about animals, magic, superheroes, and more. I have many works in progress including; animal point of view adventures, fantasy, realistic fiction, sci-fi, a graphic novel, and more. I read a lot as my followers on Goodreads, BookBub, and Twitter are well aware of! I also have many other hobbies, some of which include; writing, photography, drawing, watching TV and movies, playing video games, listening to music, coloring, working jigsaw puzzles, working puzzle and activity books, and collecting various things. I love animals and currently have a Toy Poodle named Merveille, and a Mini Rex rabbit named Kojikaki. I have adopted most of my pets from rescue centers.
View all posts by animalsandmagic →
This entry was posted in Pets, random and tagged animals, photography, anipals, chihuahua pictures, chihuahua's, dog care, dog pictures, dogs, pet care, pets, pictures, stories, Taco, tooth care, treats. Bookmark the permalink.