Posted on July 7, 2014 by animalsandmagic

This tour highlights a main character from one of the WIP (works in progress), recently published, or soon to be published works of authors tagged. Last week I was tagged in this event by Rita Lee Chapman. Her bio and links are as follows:

“Rita Lee Chapman was born in the UK and migrated to Australia in her  early twenties.  It was only when she retired that she wrote her first  novel Missing in Egypt a romantic travel mystery. Her second book Winston – a Horse’s Tale is for horse lovers from teenagers upwards.  Told by Winston himself it relates his life experiences in Australia, as well as those of other horses he meets along the way. Rita enjoys playing tennis, reading, swimming, walking and the theatre.

1) What is the name of your character? Is he/she fictional or a historic person?

The name of the character I am posting about today is Asantra. Though she might argue otherwise, Asantra is fictional.

2) When and where is the story set?

The story is set in present day and takes place in two places, the Other Realm and the Mortal Realm.

3) What should we know about him/her?

Asantra is basically a good hearted witch and human-wolf shape shifter who is just beginning to learn about mortals and their realm. Asantra is highly adventurous, a bit stubborn and can be short tempered. These qualities often lead her into trouble.

4) What is the main conflict? What messes up his/her life?

Asantra’s problems really begin with a bad experience in the Mortal Realm that leaves her believing that she hates mortals when one she thought was a friend acts very differently towards her upon discovering she is a witch. Previously Asantra had really enjoyed her adventures in the Mortal Realm but after this experience she comes to believe that this is the way all mortals probably are. Things are only made worse when Asantra comes to the age when it’s time for her to live in and go to school in the Mortal Realm as she brings her attitude towards mortals with her and has a hard time getting along with them.

5) What is the personal goal of the character?

Asantra really doesn’t have any personal goals at this point in time. She isn’t a very goal oriented type of person. Her main goal is just to have fun, though for a while Asantra’s goal seems to be to disprove her mom’s theory that witches and mortals can live together peacefully.

6) Is there a working title for this novel, and can we read more about it?

The title of this book will be Mortal Realm Witch: The Magical Adventures of DWW2. If you would like to find out more about it you can do so by visiting the Mortal Realm Witch Series website at http://www.mortalrealmwitch.com. Besides learning about the book you can meet Asantra and the other characters in the Meet the Characters section of the site and find a link to some character interviews, as well as read a story featuring her in the Extra’s section. You can also discover more about Asantra and the other characters by visiting my Goodreads group: Character Chat: https://www.goodreads.com/group/show/113088-character-chat.

7) When can we expect the book to be published?

I am expecting to publish this one sometime in 2015, though there is always a small chance it could be released near the end of 2014. In the meantime anyone interested in discovering the stories before Asantra’s appearance can read any of the currently released books in the Mortal Realm Witch Series which include; Book One, Mortal Realm Witch: Learning About Magic, which features Asantra’s mom as a young witch who is just learning how to use her newly discovered magical powers and learn responsibility in the process, and Book Two, Mortal Realm Witch: The Magic Continues, which feature the continuing adventures of DWW.

Book Three, Mortal Realm Witch: Realms Unite? and Tales of Familiars: The First Mortal Realm Witch Series Companion are due out this month so there is plenty of reading you can do prior to meeting Asantra if you desire to do so. Or if Asantra’s the only character you currently have interest in then you are in luck as each book in the Series can be read individually and you will still get a full story. However you won’t get to see the progress of the characters or main series storyline as easily. 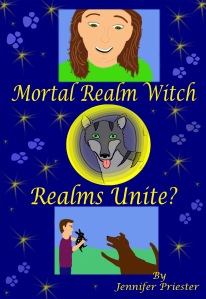 1) You will answer the same 7 questions I did in this post.

2) You will be required to post 1 week after I did which would be July 14th.

3) As seen in the beginning of my post, you will need to include a short bio of the person who tagged you as well as a link back to their blog. You will also want to include an explanation of the tour as I did at top.

4) At the end of your post if you managed to tag other authors you would add their bio and link at this point. Since I couldn’t get anyone I wasn’t able to do this.

Will you consider yourself tagged and continue this tour?

I am an author, artist, photographer, and the owner of A&M Moonlight Creations, an independent publishing company. I write children’s-tween fiction about animals, magic, superheroes, and more. I have many works in progress including; animal point of view adventures, fantasy, realistic fiction, sci-fi, a graphic novel, and more. I read a lot as my followers on Goodreads, BookBub, and Twitter are well aware of! I also have many other hobbies, some of which include; writing, photography, drawing, watching TV and movies, playing video games, listening to music, coloring, working jigsaw puzzles, working puzzle and activity books, and collecting various things. I love animals and currently have a Toy Poodle named Merveille, and a Mini Rex rabbit named Kojikaki. I have adopted most of my pets from rescue centers.
View all posts by animalsandmagic →
This entry was posted in Books, Characters, random and tagged Asantra, author interview, authors, blog tag, blog tour, book series, books, character chat, character interview, children's fantasy, childrens fiction, dww2, fantasy, fiction, interviews, jennifer priester, mortal realm witch, rita chapman, the magical adventures of dww2. Bookmark the permalink.