Posted on April 5, 2018 by animalsandmagic

The first thing I thought when I started reading was that the five seemed like a fun group. I love how throughout, unlike a lot of other books like this, there are light hearted moments with the characters that are fun to be part of. These characters are easy to like and are quick to feel like friends more than just characters I’m reading about. It’s rare for me to actually feel involved with the characters and the world. This book accomplishes that. It’s a highly engaging and fast paced read. Unlike many longer books, I didn’t want to take a break while reading. I still needed to, but I really didn’t want to stop reading for anything. I was surprised for the kind of book it is, that I found it to be believable and have a realistic feel to it. The world and characters are easy to imagine and at a different time, I think the village would be an awesome place to live. It sounds like it would be paradise during better times. 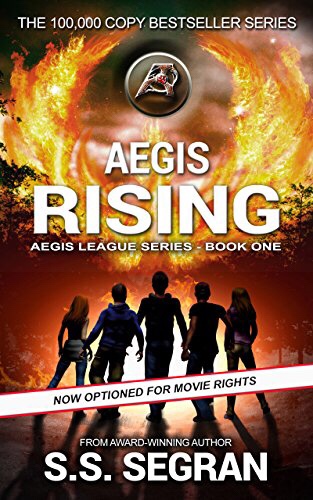 Check out Aegis Rising on Amazon if you haven’t yet gotten a chance to read the first book in the Aegis League Series.

I am an author, artist, photographer, and the owner of A&M Moonlight Creations, an independent publishing company. I write children’s-tween fiction about animals, magic, superheroes, and more. I have many works in progress including; animal point of view adventures, fantasy, realistic fiction, sci-fi, a graphic novel, and more. I read a lot as my followers on Goodreads, BookBub, and Twitter are well aware of! I also have many other hobbies, some of which include; writing, photography, drawing, watching TV and movies, playing video games, listening to music, coloring, working jigsaw puzzles, working puzzle and activity books, and collecting various things. I love animals and currently have a Toy Poodle named Merveille, and a Mini Rex rabbit named Kojikaki. I have adopted most of my pets from rescue centers.
View all posts by animalsandmagic →
This entry was posted in Uncategorized. Bookmark the permalink.